HANBOK-KOREA
Hanbok is the most representative example of traditional costumes in South Korea. In 1996, the south Korea Ministry of Culture, Sports and Tourism made "Hanbok Day" to encourage South Korea citizens to wear Hanbok.  Hanbok is made up of various fabrics. It is comprised of five basic colours which is red, blue, yellow, black and white. One of the special parts of Hanbok is it has no pockets and buttons. In a full set of Hanbok consists of a few parts whih is jeogori(shirt), chima(skirt), baji(pants), jipsin(shoes) and so on. 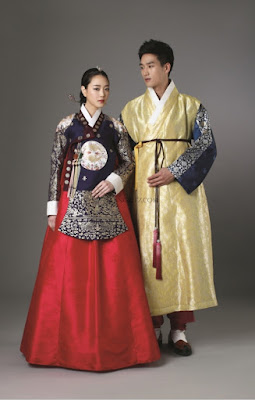 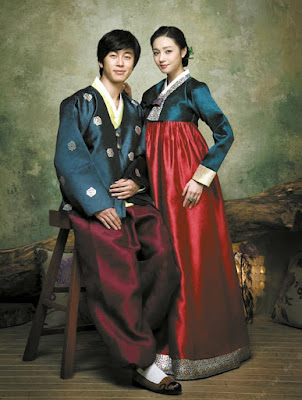 Jeogori - Jeogori is the basic upper garment of the hanbok. It worn by both man and woman. It cover the arms and upper part of body. The basic form of a Jeogori consists of gil, git, dongjeong, goreum and sleeves somae. Gil (길) is the large section of the garment in both front and back side and git (깃) is a band of fabric that trims the collar. Dongjeong (동정) is a removable white collar placed over the end of the git and is generally squared off. The goreum (고름) are coat strings attached to the breast part to tie the jeogori. Women's jeogori may have kkeutdong (끝동), a different colored cuff placed on the end of the sleeves.

Chima - Chima is the bottom part of women's Hanbok. Chima is known as skirt ,it also called sang or gun in hanja. The underskirt or petticoat layer is called sockchima.

Jokki and Magoja - Jokki is a type of vest, while magoja is an outer jacket. Each is additionally worn over jeogori foe warmth and style. Magoja does not have git, the band of fabric that trims the collar or goreum(tying strings) unlike jeogori and durumagi(overcoat).

Hwa - Hwa are a type of traditional Korean boot, which is a subdivision of Korean shoes.

Hanbok is still worn for the wedding celebration. Below show the example of wedding Hanbok.

Posted by unimap ikom assignment at 01:30